The production from wind sources in the first 28 days of last month reached 6,937 GWh, 62.7% higher than the same period last year, and it accounted for 32.9% of  the total production of electricity in March. 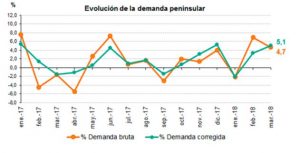 Until March 28 and according to estimated data, generation from renewable energy sources accounted for 56.6% of production while 77.7% of electricity production came from free CO2-emissions technologies. 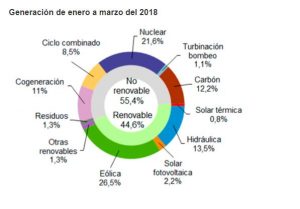 As for all last year, Castilla y León was the autonomous community that generated more wind energy in 2017. Following it, the most productive were Castilla la Mancha and Andalusia. Galicia, on the other hand, is not among the three Autonomous Communities with the highest generation for the first time, according to data from the CNMC published by the Wind Business Association (AEE for its acronym in Spanish).

In December 2017, the EU broke wind generation record: 41 TWh (terawatt per hour), equivalent to 16% of its generation mix. It had not produced so much in its entire history.

Not only is wind a major player in power generation in Spain, but also in Europe: in December 2017 the EU broke its wind generation record: 41 TWh (terawatt per hour), equivalent to 16% of its generation mix. It had not produced so much in its history, according to the latest reports of the European Commission on the gas and electricity markets, which have just been published and cover the last quarter of 2017.

The value and the price of renewables