by Carlos Sánchez
in WIND
0

Since the Energy Reform came into force three years ago, 65 MW of wind power have been installed, compared to 2,334 MW in the previous three-year period. Thus, wind turbines and components manufacturers have been forced to export almost 100% of what is produced in Spain. The sector expects the auction planned by the government to present the appropriate design and re-launch investments.

Last year, wind power increased by 38 MW in Spain, bringing the total to 23,026 MW at 31 December 2016, according to the data collected by the Wind Business Association (AEE for its acronym in Spanish) using the Commissioning Certificate criteria.

Of this amount, 32 MW (84% of the total) correspond to wind farms  in Castilla y León, which were already registered in the former Pre-allocation Register and have not been installed before due to problems unrelated to the developers, which entitles them to receive the remuneration of facilities that was in force prior to the Energy Reform. The rest corresponds to the first megawatts installed within the Canarian quota (4.6 MW) and to a repowering in Galicia (2.1 MW).

That is to say, “the paralysis in which the market has been plunged since the Energy Reform came into force continues,” the AEE said in a statement. And the fact is that in the last three years, only 65 MW of wind power have been installed in the country, compared to 2,334 MW in the previous three-year period. This has forced wind turbines and components manufacturers present in Spain to export virtually 100% of the goods manufactured in the country in the last three years, which complicates their continuity in the country. 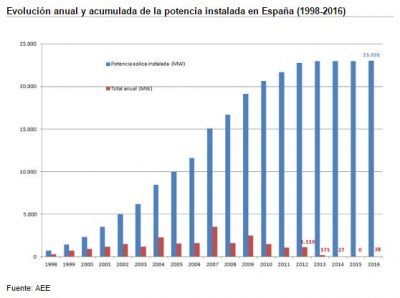 Prices 28% cheaper thanks to wind power

Meanwhile, it is necessary to consider that if in Spain there were not 23,000 MW of wind power that provide clean and indigenous energy to consumers, in 2016 the price of the electricity market would have been 15.26 euros / MWh higher – 28% – according to AAE calculations. For the entire year, wind power generated 47,721 GWh, a very similar amount to 2015, and supplied electricity to 18.4% of Spaniards, according to provisional data from REE, the system operator.

In addition, wind power saved 227 euros for each average consumer and 15,709 million euro for the electricity system in four years, according to the report of consulting firm Deloitte “Wind in the Spanish economy 2012-2015.”

The auction design will be key

The eyes are now on the auction of 3,000 MW of renewable power announced by the government that could put an end to the paralysis of investments occurred since the green moratorium, “as long as it was well targeted,” the AEE said. In their opinion, the final design of this auction – which is still in the period of public information – will be key.

AEE advocates for an auction system that strikes the balance between promoting cheap, autochthonous and emission-free energy, with the promotion of the Spanish industrial fabric. To do this, it would be necessary to have quotas differentiated by technology, so that the companies had visibility and could make decisions accordingly. A system that not only guarantees compliance with EU’s environmental targets for 2020 and 2030, but also contributes to re-launch the economy of the different autonomous communities and the creation of industrial employment.

The Energy Reform and the reasonable profitability

In their views, it should also be taken into account that, in order to re-launch investment in the sector in Spain, it is necessary to settle certain aspects of the Energy Reform – especially Royal Decree 413/2014 – which are an obstacle to the success of the auction due to the legal uncertainty of the model itself.

According to the Wind Business Association, it is also necessary to get rid of the limits of the expected market price path that prevent from achieving the profitability guaranteed by the law. Furthermore, they also think that companies should be compensated every year instead of every three years.

In the same vein, they believe that “for year 2020 and following, a market price path must be used to calculate the remuneration more in line with reality, a view shared by the CNMC itself as noted in separate reports.“

This would mean using the current price of OMIP future for year 2020 at 42.22 euro / MWh, compared to the 52 euro used by the regulator in its proposal, still pending publication in the BOE although it is the norm which sets the sector remuneration with effect from 1 January. “That is to say, at the moment, the Spanish wind companies do not know on what compensation they count“, they claim.

Hereafter, the different rankings by installed capacity as of 31st December 2016 can be consulted segmented by autonomous communities, by developers and by manufacturers: 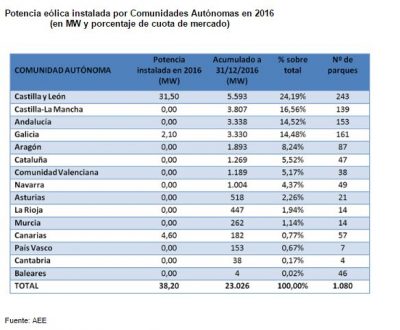 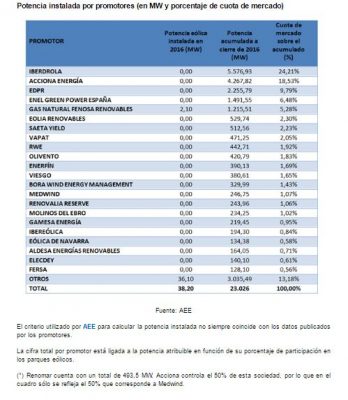 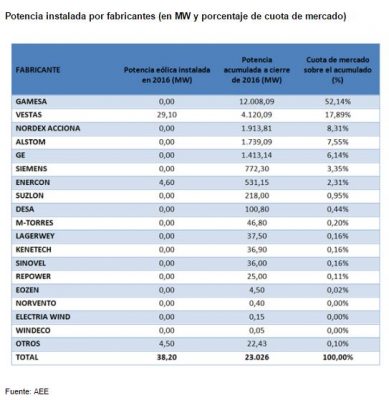 Ivanpah, one of the world’s largest solar thermal plants