The value and the price of renewables

Just as we are on the verge of knowing the content of the report by the Commission of experts appointed by the Government to point out the way ahead for the Spanish energy transition and the coming Law on Climate Change, on this article, José María González Moya general director APPA Renewables demonstrates with data, why keeping on chanting the mantra of “renewables are expensive” is no longer tenable.

We have witnessed in recent times an intense debate about what our future energy mix should be. Once the renewable targets for 2020 are in place while those for 2030 are being discussed in Brussels, this debate appears to be looking only for its own interest instead of the common good.

Inevitably, and as something completely legitimate, each stakeholder defends its own interests in a competitive market. Over these recent months when the commission of experts has been preparing its report on the future Law of Climate Change and Energy Transition, we have heard about the benefits of renewables, nuclear, gas or coal. Interestingly, gas and coal have been presented as the best technology to support an energy transition, something that is deeply appreciated. After years of criticism, renewables today are the desired dance partner.

Interestingly, gas and coal have been presented as the best technology to support a transition towards renewables, something that is deeply appreciated. After years of criticism, renewables today are the desired dance partner.

However, it is clear that by considering a scenario of between 27% and 35% of renewable energy in the energy system – which is not the electrical system- by 2030, many of these technologies will have to change their function. Former protagonists of our energy mix, they must now become complementary. And as renewable generation greatly increases some will decrease their participation in the system, something that has already started to happen.

In this context, we are witnessing a defense of each technology´s benefits and where this cannot be based on emissions or waste reductions, it is based on price. As we have already said, this defense is legitimate. Just as Appa Renewables defends the importance of renewable energies, others stakeholders defend the energies they represent. The problem arises when that defense stems from the regulator itself, which, to make matters worse, has among its objectives to lead the energy transition in order to meet the targets of decarbonisation and renewables share in the system, something deeply puzzling.

When the key messages passed by the Ministry point out at a more expensive system should the thermal or nuclear power plants be cut down, then presenting some renewables figures in which renewable energy is combined with cogeneration – which mostly uses gas – to inflate the costs of renewables and with not even one of the benefits of these energies being mentioned, from the sector not only are we worried but amazed.

Electricity price rises when there are more fossil technologies in the system but they prefer to say that the electricity goes up because there are less renewables.

Amazed, we say, because the reality of the system is ignored when talking about prices. We have heard from the Minister himself, when at the end of 2017 the price of the wholesale electricity market was high, that the problem was the lack of water or wind. Maybe it would be better to call things by their names. First, water and wind do not lower the wholesale market price. It is reservoirs and wind turbines, hydraulic and wind electricity, not water and wind.

Secondly, they could also have said that electricity price rises when there are more fossil technologies in the system but they prefer to say that the electricity price goes up because there are less renewables. For practical purposes it is the same, but not for the purposes of these energies image. 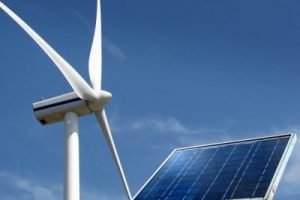 APPA Renovables has been editing since 2009 the Study on the Macroeconomic Impact of Renewable Energies in Spain where we analyze the costs, but also the benefits of these energies. Upon entering the system, they displace generation units that have higher prices in the auction. This is known as “depressant effect”.

In the 2005-2016 period, renewable energy saved 55,064 million euros to the electricity pool and was granted 49,739 million euros remuneration

In the 2005-2016 period, renewable energy saved 55,064 million euros to the electricity pool and was granted 49,739 million euros remuneration. Without considering the environmental effects, without considering the benefits of reducing energy dependence, without valuing jobs generated or the rural population fixing… without analyzing more benefits than the purely monetary, the math has come out during these years. An electrical system without renewables would have been more expensive.

Of course, mistakes have been made along the way. The excess of solar technologies compared to planning, the retroactive cuts that will continue in international arbitrations during the next few years, the moratorium followed by precipitous auctions … But keeping on chanting the mantra of “renewables are expensive” when projects of the past have diminished both our electric market, also achieving the reduction of costs that we enjoy today, is no longer tenable. They provide us much more than what they cost us, also in economic terms. As seen above, in the energy sector Antonio Machado’s maxim is also valid, “every fool confuses value and price”.