The rapid economic growth of India, China and Asia will raise global energy demand by a third in 2040

by Carlos Sánchez
in REPORTS
0

The 2019 edition of BP’s Energy Outlook explores the main forces and uncertainties that could impact the global energy markets until 2040. Among the main conclusions of the report annually produced by the British oil company, is he increases by one third of the world’s energy demand in 2040, as a result of the rapid growth of developing economies, specifically India, China and Asia. 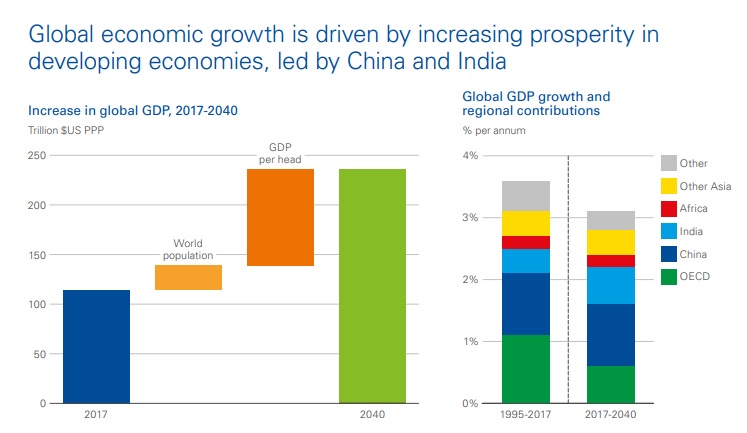 The energy consumed by the industrial sector and construction accounts for about 75% of this increase in global energy demand while the growth of energy demand in the transport sector is considerably reduced, compared to the past, as vehicles efficiency advances accelerate.

As stated in the report, electricity represents 75% of the increase in primary energy. 85% of the world´s energy demand growth is met with renewable energy and with gas. Also according to the BP Energy Outlook 2019, renewable energies will become the largest source of electricity generation worldwide in 2040, since the penetration rate of renewables into the global energy system is faster than any other fuel in history. 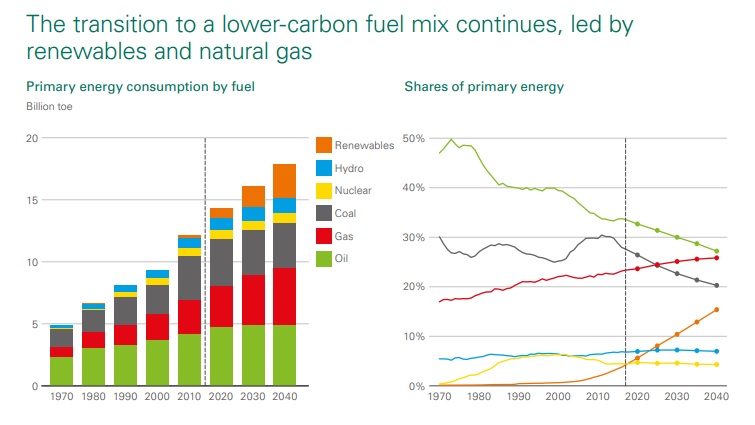 In this sense, executive director of BP, Bob Dudley, stated: “the Outlook focuses on how fast the global energy system is changing, and how the double challenge of needing more energy with fewer emissions is marking the future“. Therefore, he added, “meeting this challenge will undoubtedly require that all forms of energy play a significant role.”

“The world of energy is changing,” explains Spencer Dale, chief economist at Group BP. “Renewables and natural gas account for most of the growth of primary energy. In our baseline scenario, 85% of the new energy generated is lower in carbon. ”

Oil demand grows in the first half of the period forecast in the report, before gradually stabilizing, while global coal consumption remains relatively stable. In all the scenarios considered in the BP Energy Outlook, a continuous investment in new oil reserves is required to meet the demand for this energy source in 2040.

The report also reflects that global CO2 emissions continue to rise, indicating the need for a demanding set of comprehensive policy actions to achieve a substantial reduction in carbon emissions.

According to Dudley, “predicting how the energy transition will evolve is a complex challenge.” In the words of the executive director, “at BP we know what the final result should be, but we do not know the exact path that the transition will take”, and he concludes, “our strategy offers us the flexibility and agility we need to face this uncertainty”.

European cogenerators will hold their annual Congress of Cogeneration in Madrid