by Carlos Sánchez
in INTERVIEWS, SELF-CONSUMPTION
0

21 editions of the GENERA Fair have gone a long way: contacts, business, presentations of new products, crazy inventions … Yes, colorful inventions that sought to generate energy in a dynamic, electronic or chemical way, and that following presentation in informative panels of the ” Gallery of Innovation” faded into oblivion because of their extravagance or lack of funding.

However this edition, the twenty-first, the one with the same figure as the century we live in has brought us the ionic energy, a generation system using salt water and an electrochemical process caused by the electrons of a metal.

From early hours of the Friday morning, dozens of visitors swirled around the ionic module that produced electricity with no more fuel than salt water. There was so much expectation that it was not until Friday afternoon, when the last visitors were dripping, that we were finally able to talk to Alberto A. Santana, the CEO and creator of the ionic module.

Dozens of visitors swirled around the ionic module that produced electricity with no more fuel than salt water.

Alberto smiled with the satisfaction of knowing that the fair had been a success for him, and with the confidence of the one who understands that his job was well done. “It’s a very simple system but it has taken us more than five years of research,” Alberto told us. “We will manufacture the modules from a factory that we are building in Valencia, and we will start the distribution from September“. The reason is that the logistics from the Canary Islands would involve costs that would make their manufacturing unprofitable.

The module shown at IFEMA could generate up to 50kW / h therefore supplying energy for a hotel of about 200 rooms, according to Alberto. We are saying that with 20 ionic modules we can generate a sustained power of 1,000 kilowatts and 10 gigawatts of positive useful life. Once the 10 gigawatts are consumed, the dealer would replace the ionic modules and renew them for another 10 gigawatts.

Our modules can also be scaled for single-family homes. In a space of approximately one cubic meter up to 15kWh could be generated, more than enough power for the needs of a home. According to Alberto, “It is not an energy accumulator system, it is not an accumulator battery that needs an external electrical source for its recharge; It is an electric generator by itself. ”

So far the development of photovoltaic panels has been aimed at improving the performance of solar capture, and the use of electricity through inverters that distributed electricity to the internal network for direct consumption, or to storage batteries for later consumption. The cost of these self-consumption systems was more profitable as long as the consumption curve coincided with the generation curve. The less coincidence, the longer the installation’s amortization time is. 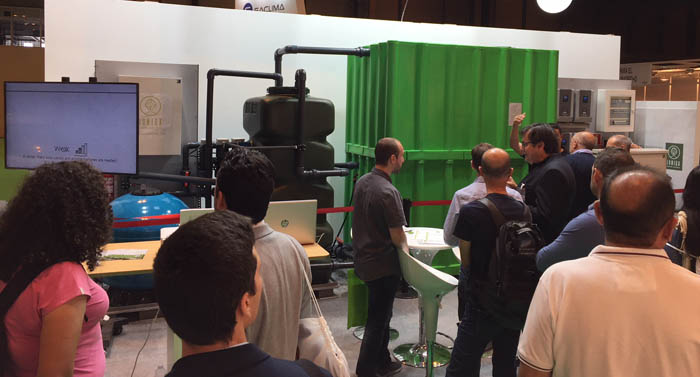 However, ionic energy has something that scares, or at least should scare manufacturers of photovoltaic solar panels. And it is the fact that it does not need the sun, not even the wind to produce energy 24 hours a day.

Alberto assures us that it works, and that it is in line with any renewable installation price. In addition the European Patent Office (EPO) has classified it as a source of renewable energy mitigating climate change. It is of last generation electrochemical type and does not require recharging because it produces the current from salts in internal electrochemical processes. Without separating membranes, it uses water and salts as an electrolyte. It works with sodium chloride or potassium chloride. It does neither generate heat nor pollutes, occupying a small area. The generator can be installed in basements, garages, indoor or outdoor. And they are also supplied containerized.

“And with each shipment we will send a bunch of bananas as a gift” Alberto told us with a bit of Canarian sense of humour.

What if after 21 editions in GENERA, a Canarian arrives and breaks the market …?

Nissan activates the largest collective solar roof in the Netherlands

Cogeneration struggling between the Renove Plan or proximity Self-consumption