Repsol has made the biggest gas discovery in Indonesia in the last 18 years and one of the ten largest hydrocarbons finds in the world in the last twelve months. The well, called KBD-2X, has a preliminary estimate of at least 2 trillion cubic feet of gas (TCF) of recoverable resources, equivalent of two years worth of gas consumption in Spain.

The discovery was made in the Sakakemang block, located in the south of the island of Sumatra, where Repsol acts as operator with 45% stake, Petronas owns another 45% and MOECO, the remaining 10%. 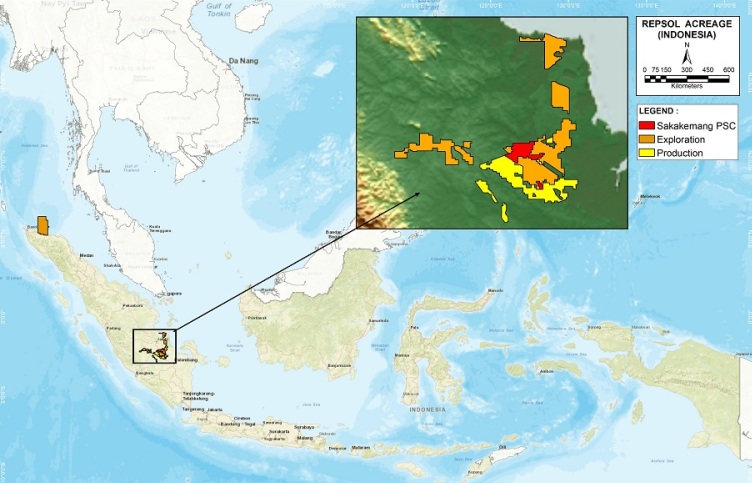 The company will continue the exploratory works in the coming months specifically with the completion of one field delineation well. Repsol collaborates closely with the Indonesian regulator (SKK Migas) in the exploration activities carried out in the country, and is working with the authorities to define the next steps of this project.

The company has several licenses in Sumatra and plans to carry out an intense drilling and seismic campaign in the 2019-2020 period. Repsol’s strategy in the exploration and production area is focused on the development of gas assets, “a key fuel in the energy transition towards a low-emission future”, as the multinational oil company explains. Gas represents about three quarters of the company’s reserves and two-thirds of its production.

Repsol has made more than 50 hydrocarbon discoveries between 2007 and 2019. Of these, ten have been considered among the largest in the world in their respective years of discovery, demonstrating Repsol´s high exploratory capacity. More than half of these discoveries are currently in production.

In Indonesia for 20 years

In 2017, Repsol produced 15 million barrels of oil equivalent in Indonesia, mainly through the Corridor asset. It has mining rights in six blocks, five for exploration and another for production / development.

Repsol´s presence in the country is basically completed by the Lubricants business, with which it has been present in Indonesia for 20 years, with local production since 2006. Thanks to the high sales growth during the last three years, Indonesia has become the third largest market for Repsol´s lubricants in the world.

The rapid economic growth of India, China and Asia will raise global energy demand by a third in 2040

24.9 GW of new wind capacity installed in Asia-Pacific during 2018

24.9 GW of new wind capacity installed in Asia-Pacific during 2018