Reindus, the program for the reindustrialization and strengthening of industrial competitiveness

The new plan of the government has a budget of 400 million euros and aims to create about 1,000 jobs

The Council of Ministers approved last Friday the Program for the Reindustrialization and Strengthening of Industrial Competitiveness 2018 (Reindus Program), with a budgetary allocation of 400 million euros and which aims to create about 1,000 new jobs.

The industry in Spain accounts for 16.3% of the GDP, more than one point below the average of the European Union, which stands at 17.6%. Our country´s figures represent a far cry from percentages like those of Ireland (33.8%) or Germany (23.6%).

On the other hand, the industrial sector generates higher quality employment. The wages of the industry are 17% higher than the average of the economy (23,156) and have shown a better performance during the crisis. In addition, the working conditions are better than those of other sectors. According to a survey by the INE on wage structure, in 2016 the average salary of the industrial sector stood at 27,198 euros per year, above construction (22,163 euros) and the services sector (22,440). 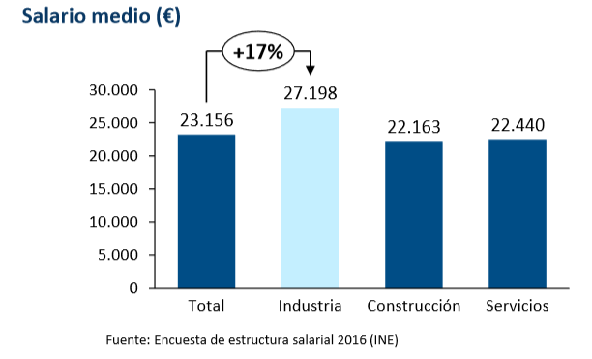 The economic figures of the Spanish industry

The economic figures of the industry in our country reflect its key role for the improvement of competitiveness and the generation of wealth and employment. Its direct contribution to GDP is 16.3%, it generates an income of 572 billion euros and employs 2.3 million people in our country. On the other hand, it is the sector with the greatest multiplier effect on the economy (1.34) and also the one with the highest productivity per person (66,000 euros).

The projects envisaged within the program for the reindustrialization include the acquisition of industrial assets, the creation and transfer of industrial establishments, the improvement of production lines and the incorporation of the Connected Industry 4.0 technologies, among others.

Uneven territorial distribution of the industry

The distribution of industry in the territory is highly uneven. The weight of the industry in relation to the GDP of each autonomous community shows differences greater than 20 percentage points. Looking at the data referred to the weight of the industry in GDP by Autonomous Community in 2017, País Vasco contributed 27.1%, La Rioja 26%, Navarra 29.8% and Aragón 22.6%. These are large percentages compared with other autonomies such as Andalusia (11.6%), Madrid (9.7%) or Balearic Islands (6.5%).

What is the aim of the program for the reindustrialization and industrial strengthening ?

Since the Government sees the program as a “key support instrument for the sector”, it proposes the following measures:

These € 400 million are expected to have an impact of € 560 million through induced investment and the creation of 1,000 new jobs.

The projects envisaged within the reindustrialization program include the acquisition of industrial assets, the creation and transfer of industrial establishments, the improvement of production lines and the incorporation of the Connected Industry 4.0 technologies, among others. Likewise, the program management will be carried out in a decentralized manner through the participation of the Autonomous Communities along with MINCOTUR in the Evaluation Commission.