by Carlos Sánchez
in COAL
0

As a result of its firm commitment to the fight against climate change, once again demonstrated at the COP23 in Bonn, the company has requested before the Ministry of Energy the authorization to close the Lada and Velilla thermal power plants, two coal plants that make a combined power of 874 MW. This request will not impact jobs.

Iberdrola has announced in a statement that it has decided to complete the process of shutting down all its coal plants in the world, a source of energy that currently represents only 1.8% of the group’s total capacity, which amounts to 48,062 megawatts (MW), and 1.5% of electricity production in the first nine months of the current year: 1,596 GWh. vs. 102,494 GWh.

In this sense, the company has requested before the Ministry of Energy, Tourism and Digital Agenda the authorization to close the thermal power plants of Lada (Asturias) and Velilla (Palencia), with combined power of 874 MW. This decision further demonstrates its commitment to reduce CO2 emissions intensity by 50% in year 2030 compared to 2007 levels and to be carbon neutral by 2050.

In contrast, and as a reflection of its commitment to clean energy and energy sustainability, Iberdrola group already has an operating capacity of 28,778 MW from renewable sources, mainly wind, both onshore and marine (15,902 MW), and hydroelectric (12,756 MW). 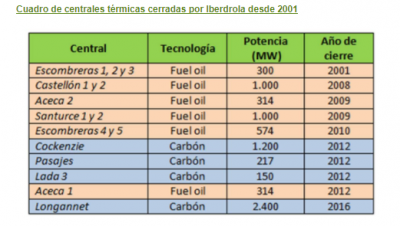 In this line, recently, and along with other relevant European utilities, Iberdrola has urged the Commission and the European Parliament to approve more ambitious environmental objectives for year 2030, increasing the renewable energies share up to 35% compared to the 27% currently proposed.

Following the closure of Iberdrola’s last operational coal plants, which is not set to impact the electricity supply security– since the company has 5, 695 MW backup capacity of in gas combined cycle power plants – the group´s emissions-free electricity production capacity will stand at 68% globally and 76% in Spain.

In the specific case of the Lada and Velilla plants, their closure will not impact the company´s firm and proven commitment to employment, since Iberdrola will relocate 100% of the workforce -90 employees in Lada and 80 in Velilla. The workers will be involved in both the dismantling work of the two plants, which will take four years from the closure approval date by the Ministry of Energy and will have an investment estimated of some 35 million euro, as well as in other facilities of the company. The areas occupied by Lada and Velilla will go through a landscape restoration.

It should be recalled that since 2001 the company has closed thermal power plants worldwide, totaling almost 7,500 MW of installed capacity. Noteworthy are the closing in 2013 and 2016, respectively, of two large coal plants in the United Kingdom, Cockenzie and Longannet, whose combined capacity amounted to 3,600 MW. In this period of time, the company also dismantled almost 3,200 MW of fuel oil plants.

Thanks to the progressive decarbonisation of its electricity generation mix, Iberdrola has been a global benchmark in the fight against climate change for more than 15 years, following investment of 90 billion euro in the period.

This has led it to be, today, the world leader in installed onshore wind power, while it has reduced its emissions in Europe by 75% since 2000, reaching levels that are 70% below the average of European companies in the sector.

Greenpeace wants to buy the largest coal-mining basin in Europe

United Kingdom breaks its own record: two months without coal