by Carlos Sánchez
in SMART CITIES
0

The City of Madrid will reduce its energy bill with the direct purchase of electricity in the wholesale market without intermediation of any marketer. Other municipalities such as Avilés, Torrejón de Ardoz (Madrid) or Canfranc (Huesca), already do so and achieve minimum savings of between 7% and 25%, according to Urbener, the company awarded to represent the City of Madrid in the acquisition of electricity as a Direct Consumer in the electricity production market.

The City Council of Madrid will thus begin to buy its electricity in the pool, notifying the start of activity as a Direct Consumer in the Ministry of Industry, without having to go through any marketer, via its direct participation in the Spot Market.

This is a pilot project of energy sovereignty that the Consistory announced last July – when it presented the next energy supply framework agreement – through which it will acquire energy without intermediaries for some of its buildings. It should not be forgotten that the City Council´s buildings and facilities consume the equivalent of 50,000 average homes daily.

To this end, a diagnosis is made of the supply points that can be incorporated into the project, which must be installations with stable and predictable electricity consumption. Between 5 and 10 buildings will become part of the pilot program. 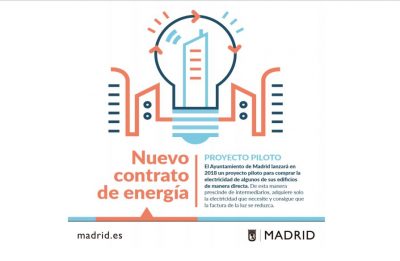 In addition, the Municipal Council has awarded a contract to URBENER for representation and acquisition of electric power on its behalf, an activity that will translate into savings of between 7 and 25 per cent in the City´s energy bill by dispensing with the marketers and their margins, as recognized by this technology company that operates in the Electric Wholesale Market and is specialized in energy purchase management.

On the other hand, the next energy supply framework agreement presented in July, which will come into force in 2018, will allow the entrance of small and medium-sized companies and will award points to those companies that cater for energy poverty situations and ensure the supply of electricity from 100% renewable origin. The new contract has a budget of 115.8 million euro and represents a saving of 5.7 million euro per year compared to the previous tender for electricity.