Spanish photovoltaic sector expects up to 5,000 million in investments

Photovoltaic projects in process in the different Autonomous Communities account for a total of 24 GW.

A rapid growth of investments estimated to reach between 4,000 and 5,000 million euros is expected in the Spanish photovoltaic sector in the next two years until 2020. This data was presented yesterday by José Donoso, General Director of the Spanish Photovoltaic Union (UNEF) throughout his appearance before the Energy, Tourism and Digital Agenda Committee of the Senate focused on explaining the photovoltaic industry´s present and future challenges.

Donoso has emphasized that, from 2020, the most likely scenario is that investments in the sector in our country be established at a level of between 1,000 and 2,000 million euros per year. This evidences the photovoltaic technology capacity to create business opportunities, in addition to responding to the challenge of climate change.

In addition, he explained that at the international level the development of photovoltaics involves the definition of a market in constant growth with an estimated value of 100,000 million euros per year, which could reach 400,000 million euros per year in 2030. While in order to consolidate this positive trend, it is essential that countries and companies continue investing in R & D, he warned.

Currently, the photovoltaic sector is experiencing a reactivation phase in our country, seeking alternatives to the auction, such as going directly to the market or through bilateral energy purchase and sale contracts, known as PPAs. For Donoso, this positive stage has materialized in the processing of several photovoltaic projects in different Autonomous Communities, among which Extremadura, Castilla-La Mancha, Andalusia, Aragon, Murcia and Castilla y León stand out, totaling 24 GW overall.

Regarding self-consumption, Donoso has highlighted, despite these obstacles, the promising result of 2017 with nearly 130 MW realized.

The general director of UNEF explained before the Senate Committee, that the main barriers that hinder the development of the sector in Spain are the institutionalized legal insecurity, with the threat of cutting-down the reasonable profitability of renewable projects, the updating of regulation on grid access and connection conditions, the delays in payments of the final settlements for the photovoltaic energy projects in non-peninsular territories and the streamlining of the network planning, both by Red Eléctrica de España, and by the distribution companies, UNEF reports in a statement. 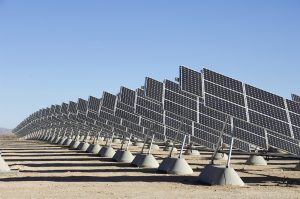 Finally, regarding self-consumption, Donoso recalled that the main barriers are administrative, due to the complex processing, and economic, with the backup toll – the so-called “sun tax” but, despite these obstacles, he has highlighted the promising result of 2017 with nearly 130 MW realized.

The electricity consumption of large companies increases by 1.2% in February

The electricity consumption of large companies increases by 1.2% in February