by Carlos Sánchez
in CSP
0

At the inaugural session of the SolarPACES International Congress in Chile, Luis Crespo stated that “solar thermal power plants will replace combined cycles as the backup technology to guarantee electricity supply.” For the president of Estela and Protermosolar, the combination of renewable fluids with solar thermal allows a mix of 100% renewable generation at a competitive cost. As an example, the latest solar thermal award in Dubai which has marked a record production price: 6c € / kWh.

Luis Crespo, president of Estela and Protermosolar, participated in the inaugural session of the 23rd edition of the International Congress SolarPACES, held until September 29 in Santiago de Chile. In his speech, Crespo said “solar thermal power plants will replace combined cycles as backup technology to guarantee electricity supply at any time of the day. In addition, the combination of renewable fluids, such as wind and photovoltaics, with dispatchable renewables, such as solar thermal, allows achieving a 100 percent renewable electricity generation mix at a highly competitive generation cost”.

Luis Crespo has set as an example the latest 700 MW solar thermal award in Dubai, a bid that has set a new record for lowering production prices for this technology, reaching 6 c € / kWh, “which undoubtedly positions solar thermal as the cheapest renewable technology (after the existing large hydraulics) to meet the demand for electricity at any time of day or night, contributing also to the stability of the networks, “said Protermosolar president.

[pullquote] “the combination of renewable fluids, such as wind and photovoltaics, with dispatchable renewables, such as solar thermal, allows achieving a 100 percent renewable electricity generation mix at a highly competitive generation cost” [/ pullquote]

Before an audience of more than 500 participants, Luis Crespo has assured that “solar thermal plants will experience a huge commercial boost due the reduction of production costs being experienced today and that will continue in the same line as market volume grows“. 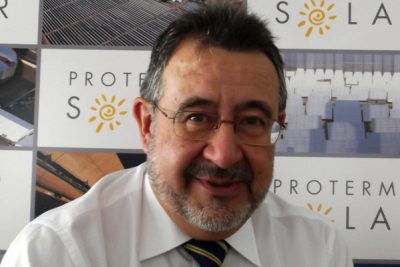 Thanks to this cost reduction, “there are no longer any price excuses to postpone a 100% renewable generation mix, with an appropriate combination of all technologies in which the percentage of power plants with storage be very significant,” continued Crespo.

In his address, Estela’s president emphasized that “solar thermal power plants are presented as an option not only technically indispensable but also as a very convenient option for the countries’ economies, since their high local content provides immediate returns in terms of employment and wealth generation, as well as, in many cases, economic convergence for the sunniest regions that are not usually the most industrialized. “

SolarPACES Conference is the largest global event on solar thermal technology and brings together leading international experts in solar concentrated or solar thermal power. It has a program of scientific conferences that accommodate the latest advances in R & D, technological developments and technology marketing. This 23rd edition is held in Santiago de Chile from 26 through 29 September.

54.9% of September’s electricity production was CO2-free