by Carlos Sánchez
in Uncategorized
0

The report of the Committee of Experts on energy transition published on Monday is committed to a greater penetration of renewable technologies in the different scenarios considered, in line with the global trend from which Spain has disconnected in recent years. However, it is striking that some of these scenarios do not establish the minimum objectives that are being debated in the European Union: between 27% and 35% of the energy.

Conversely, as APPA Renovables points out the report presents scenarios “far from our possibilities such as the installation of 124,500 MW of renewable, more consistent with a theoretical exercise than a feasible approach“. For UNEF, the baseline scenario reflected in the document would entail a share of 29.7% of renewable energy consumption in the final gross energy consumption of Spain by 2030, date by which it should have reached 35%, in line with what is defended by Parliament European.

For Fernando Ferrando, president of the Fundación Renovables, the document is in a first revision of the text, it is “spoiling the ship for a hap’orth of tar” containing some satisfactory proposals, such as environmental taxation or the discontinuing of the “sun tax”, which then disappear when they are to be materialized. That is, “ideas are proposed but not developed, it is a document lacking of commitment,” he says.

For the Fundación Renovables, it is not acceptable to make an energy transition proposal and say that changes in consumer behavior have not been taken into account

Fernando Ferrando emphasizes that the report says that it is difficult to reach 27% of renewable penetration while the European Parliament speaks of 35%. “Everyone expects us to stay between 30% and 32%, that is, the Spanish Committee of Experts begins by denying the proposal of the European Union,” he says.

For the Fundación Renovables, it is not acceptable to make an energy transition proposal and say that changes in consumer behaviour have not been taken into account, as the document says literally. They also criticize the extreme defence of gas in transport, which has not taken into account the city as a key centre of change or the use of nuclear as a tool to reduce emissions. 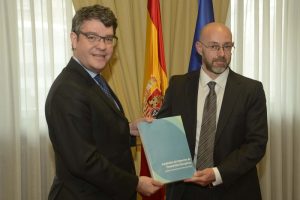 Regarding emissions: “We have an 83% external dependency; 50% dependence on oil; we spend around 60 dollars a barrel; out of the 15,000 million euros in the trade balance, we have an energy intensity well above any other country in our surroundings; we have paralyzed the renewables in the last five years, and suddenly the conclusion of this report is that we are doing well as for the level of emissions? “Ferrando explains.

The socialist spokeswoman for Energy in Congress, Pilar Lucio, also highlights “the lack of ambition in the fulfilment of 35% of renewable energy in 2030” in the document. “Without changes in the market model it is very difficult to boost the penetration of the renewables needed to meet the objectives that the European Parliament has already set, “she asserts, urging that the debate be transferred to the Congress of Deputies.

José María González Moya, general director of APPA Renovables, explained to Energynews that overall they are satisfied that the report presented yesterday by the Committee of Experts on energy transition to the Minister of Energy, Álvaro Nadal, sets a predominantly renewable scenario but they miss a more vehement proposition in terms of the convenient complementarity of different technologies, since it obviates the backup capacity of some renewable technologies such as biomass.

Regarding the latter technology, APPA believes that it is striking that it has not been taken into account when the report itself speaks of its backup capacity and considers it “important” to propose specific auctions per technologies, acknowledging the different characteristics of renewable technologies. “This technology, which has an additional potential of 8,000 MW, would contribute dispatchability and firmness to the national mix, and would help guarantee security of supply,” they noted in a statement.

In general, they believe that the experts have based much of their analysis on the costs and not on the potential in terms of resources and industry present in our country, especially in the case of wind, whose base scenario seems unambitious given the industrial and exporter capacity of the sector. In that sense, they also miss a more ambitious R + D + i implementation. Photovoltaics is the only technology that grows above the development of recent years in the report.

It is clear that before these expectations the Spanish Photovoltaic Union (UNEF), takes a positive view of the document contents. “The forecast of a considerable increase in photovoltaic installed power in 2030, which would increase tenfold compared to current levels, is a key opportunity to provide citizens access to cheaper energy and to reach a more stable development model, in contrast to the dynamics of acceleration-braking-acceleration that has marked the past years “, says José Donoso, general director of UNEF.

Meanwhile, UNEF expects that the entry of energy storage in combination with photovoltaic technology will be faster than proposed in the document. They also believe that the price definition system of the electricity market would require a reform, so that it sends appropriate price signals to attract investments within a competitive framework characterized by a high penetration of renewable energies.

As for the proposal of the experts to take costs out of the electricity bill and pass them on to the General State Budgets, as we already reported yesterday, APPA Renovables does not see the possibility that renewable power plants installed in the past be financed from the General Budgets of the State, regardless of whether there is a fiscal reform in the energy sector. “Renewables have costs and benefits that should not be dissociated, just like there is significant savings in the wholesale market and this is reflected in the system, the costs must also be charged in the same system“, the president of APPA Renovables José Miguel Villarig clarified in the statement.

APPA Renovables does not see the possibility that renewable power plants installed in the past be financed from the General Budgets of the State, regardless of whether there is a fiscal reform in the energy sector.

Although José María González Moya pointed out that the approach to taxation according to the principle of “polluter pays” seems good to them, it is also true that they have not appreciated that much the handling of biofuels that are not compatible in the opinion of APPA with current European regulations nor future.

In this regard, the Association’s statement notes that in the case of transport, the document ignores the essential role that both conventional and advanced biofuels must play to achieve the objectives of decarbonisation and renewable energies foreseen for 2030, especially in subsectors of difficult electrification such as aviation and the transport of goods by road.

Likewise, it affirms that ” the Commission´s failure to effectively take into account the serious impact that its proposals could have on the survival of the Spanish biofuel industry and on the significance of having a diversified mix of renewable sources in transport is surprising“.

Renewables companies also expressed themselves. Norvento, for example, takes a positive view on the relevant role that the Committee of Experts on Energy Transition grants to distributed generation, as well as other elements inherent to its expansion, such as those related to sustainable building and the need to specify the regulations around the almost zero energy consumption buildings (also called zero energy).

In this context, the company believes that today there is sufficiently mature and applicable technology, thanks to microgrids, to provide buildings and industries as a whole with a high degree of energy independence by generating and consuming their own renewable energy.

On the part of the Ecological Association Friends of the Earth, Hector de Prado, responsible for Climate and Energy, believes that “in general terms, the experts are telling us: let´s extend nuclear power (despite the exorbitant costs and the risk involved), let’s maintain a little more coal (even if it is an obsolete technology), and let´s install more renewables from now to 2030, but of course with natural gas (more infrastructure to finance and amortize.) The minister must be quite pleased, no doubt “.

In a release this Association reminds that 3 of the 14 representatives have abstained from giving the go-ahead to the report, that is, more than 20% of the representatives.

Along these lines, Ecologists in Action say that the report vindicates the environmental organizations that have been insisting for years on the need to foster a 100% renewable energy system as soon as possible. They also appreciate that it acknowledges that the decentralization and democratization of energy, as well as energy efficiency measures in buildings, are key to achieving these objectives.

However, they note that “it keeps on relying on an oligopolistic system and on fiscal measures that violate the polluter-pays principle. An example is the carbon tax which does not establish any minimum price that guarantees any effect in reducing the emissions: A tax proposal that can hardly bear the financing of the necessary energy transition and continues to perpetuate unfair mechanisms such as capacity payments“.

The Government will seek to progressively reduce regulated costs

Nordex in Germany. Grows almost 50% and increases its market share