The Urban Intelligence and Sustainability Forum starts on Wednesday in Malaga

by Carlos Sánchez
in SMART CITIES
0

The ninth edition of Greencities, the Urban Intelligence and Sustainability Forum to be held between April 25 and 26 in Malaga, will present the most innovative advances and points of view for smart and sustainable urban management. In addition, more than 100 organizations will exhibit their products.

The forum aims to bring together technicians and institutional representatives from more than 270 cities interested in learning in depth about the National Smart Territories Plan, opportunities in the circular economy, application of the smart model in tourist destinations and in rural areas, ‘city 4.0’ or efficient and professional rehabilitation, among others.

Likewise, more than a hundred public and private organizations will have a presence in the exhibition area to show products, services and solutions for urban management, with special attention to entrepreneurship with an innovative base. In total, including the presentations, talks and demonstrations to take place in the ‘Green LAB’ and ‘Elevator Pitch’ functional spaces, more than 200 companies are anticipated to participating.

In addition, this year the forum -in which more than 100 organizations will exhibit their products- will host the III Meeting of Mayors with Innovation -organized by Red Innpulso-, and the meeting for the promotion of the sustainable and smart cities of the International Telecommunications Union (ITU) and the United Nations Economic Commission for Europe (UNECE).

The mayor of Málaga, Francisco de la Torre; the CEO of Red.es, José Manuel Leceta; the vice-chancellor of Smart Campus of the University of Malaga (UMA), Raquel Barco, and the vice-president of the employer’s association of the technological and digital sector -AMETIC-, Adolfo Borrero, presented this year’s edition on Friday. 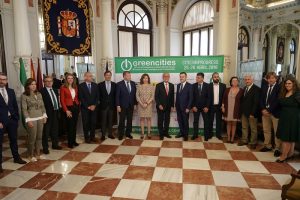 De la Torre stressed that “the aim of Greencities is to show, in a dynamic and participatory way, a global and integrated vision of urban management challenges in areas of action such as government and citizen participation, energy, economy, mobility, environment and building, “he detailed.

As for the ICT & Sustainability Forum, one of the show’s flagship spaces sponsored by AMETIC, Borrero has announced that it will present “the Spanish ecosystem of smart cities“, not only from the point of view of the work being carried out by “ministries or industries, but also what cities are doing. ” The association vice president added that the forum will address a “structured theme in four key areas“, which are “energy, mobility, tourism and smart buildings.”

It should be noted as a novelty that Greencities in its 2018 edition incorporates the celebration of the National Forum of Rehabilitation, Efficiency and Sustainability – jointly organized with the National Association of Rehabilitation and Reform Companies (ANERR) – and a forum on Circular Economy of the Area of ​​Environmental Sustainability of the Malaga City Council.

Thus, Greencities will advance the most up-to-date innovative agenda linked to the development of smart, efficient, sustainable and connected territories. More than 250 international speakers will participate in an extensive program of conferences and round tables that includes the presentation of the National Smart Territories Plan, which will be presented by the Secretary of State for the Information Society and the Digital Agenda (SESIAD) and Red.es.

The Secretary of State for the Information Society and the Digital Agenda (SESIAD) and Red.es. will present the National Smart Territories Plan

Along with it, mayors of Spanish cities such as Malaga, Santander and Benidorm will exhibit their different smart projects and initiatives, all the trends in the configuration of smart tourist destinations will be addressed, the guidelines for the application of said model in the rural field will be announced, and the future towards the concept of totally digitized and connected ‘city 4.0’ will be analyzed.

Greencities also includes financing tools for projects and programs linked to this field, as well as for the internationalization and convergence in the global market of the specialized productive fabric. In this connection, two reverse commercial missions will take place, one organized by the Andalusian Agency of Foreign Promotion-EXTENDA, and another specializing in smart tourism, the organization explains in a statement.

Two reverse commercial missions will take place: one organized by the Andalusian Agency of Foreign Promotion-EXTENDA, and another specializing in smart tourism

In addition to its own content, Greencities has been the setting chosen by large national and international organizations to celebrate their annual thematic calls. This is the case of Innpulso, the Network of Science and Innovation Cities, which on Wednesday the 25th will bring its Third Meeting of Mayors with Innovation to Greencities.

Along with this, on Thursday the 26th, the third edition of the United for Smart Sustainable Cities Meeting (U4SSC) annual meeting will take center stage, organized by the International Telecommunication Union -ITU – and the United Nations Economic Commission for Europe (UNECE). The U4SSC is a global platform to encourage the use of information and communication technologies (ICT) in the transition to sustainable and smart cities.

Greencities is organized by the Palace of Congresses and Fairs of Malaga (Fycma) jointly with the City Council of Malaga, the Secretary of State for the Information Society and the Digital Agenda (SESIAD) and Red.es – under the Ministry of Energy, Tourism and Digital Agenda-. It is also co-organized by the Multi-sectoral Association of Electronics, Information Technology, Telecommunications and Digital Content Companies (AMETIC).

Transforming Lighting 2018: the keys to the future lighting sector