by Carlos Sánchez
in ENERGY TRANSITION
0

The preliminary draft of the Law on Climate Change of the Balearics sets targets for reducing emissions by 40% by 2030 and 100% by 2050 and to boost renewable energies so that the Islands can achieve 35% of the total of energy production with these sources in 2030 and 100% in 2050.

The draft focuses on the reduction of emissions and the promotion of renewable energies. It should be noted that 35% of CO2 emissions in the Islands result from road traffic. As for the power generation plants, Es Murterar is responsible for 25% of the emissions throughout the Balearic Islands and the Maó power plant for 56% of those produced in Menorca. Meanwhile, it should be noted that the Autonomous Community only produces 2% of energy from renewable sources, according to a statement by the Balearic Government.

Regarding the power generation plants, Es Murterar is responsible for 25% of the emissions in the Balearic Islands and the Maó power plant of 56% of those produced in Menorca.

– Solar panels will have to be installed in large car parks and new buildings and industrial buildings of more than 1,000 square meters. Taking advantage of the land already urbanized.

– The Consells will have to set the zones of the suitable sites to install renewables in each island and the rustic buildings not intended for agricultural uses will have to self-supply with renewable.

– As of 2025, diesel vehicles will not be able to enter the islands in the Balearic Islands.

– By 2020, large and medium-sized companies will have to calculate and register their carbon footprint and from 2025 they will have to submit reduction plans with minimum binding targets.

Law on Climate Change of the Balearics

It also provides for the creation of the Balearic Institute of Energy, which will boost renewable projects from the public sphere, promote citizen participation in the electricity system and also act as an active agent in energy markets. 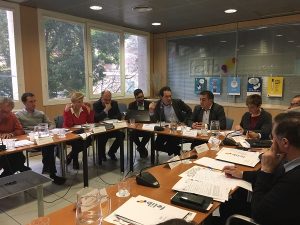 In addition to the obligation that in 2025 all the lighting be low consumption (LED) and the implementation of solar panels in car parks of more than 1,000 square meters, the law provides for the installation of renewable and energy efficiency systems in public administrations.

At the moment, there are councils that have already started the lighting change. In addition, the involvement of municipalities in the installation of charging points (which has counted and will continue to receive government aid, co-financed with FEDER funds) has been key to turning the Balearic Islands into leaders in recharging infrastructure, the Balearic Government says in a statement.

The counselor has informed that the public involvement period of the draft law will begin shortly. During that period each municipality – as well as all the private sector and citizenship – may submit proposals deemed appropriate.

Tags: BalearicsemissionsLaw on climate change of the Balearicsrenewables
Previous Post