by Carlos Sánchez
in ELECTRIC MARKET
0

Still with a low demand for electricity due to the holiday period, the timid wind production places the Spanish electricity market as the second with the highest price in Europe, and the one with the most expensive price for January 1.

In the winter holiday period, since Monday, December 24, the Iberian electricity market MIBEL for Spain and Portugal has hit the highest prices among the main European markets analyzed by AleaSoft, only behind the British market. The average price for Spain in the wholesale electricity market was € 62.76 / MWh.

For the firm specializing in forecasting in the energy sector, particularly relevant is the price reached on January 1, 63.45 € / MWh, which was the highest among the European markets that day, while the German market recorded a negative price of -4.30 € / MWh on average for the 24 hours. The low wind production in the peninsula on the first day of the year did not manage to compensate one of the lowest demands of this winter, pushing up the price on a day that is usually one of the lowest of the year.

The rest of the European markets under analysis by AleaSoft have remained close to or below € 60 / MWh during these holidays. 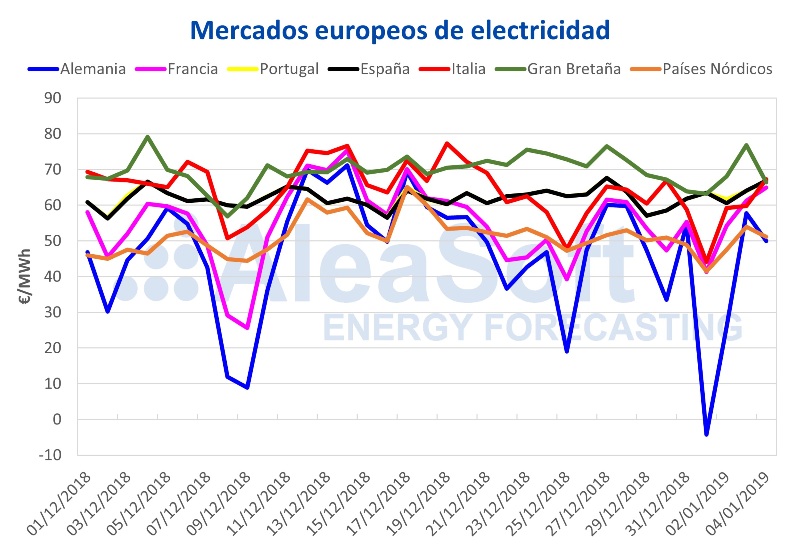 In the period between the festivities of Christmas and New Year, activity in the futures markets of oil, gas, coal and CO2 has been little, so some prices have experiences some somewhat erratic fluctuations.

The price of European API2 coal for the month of February fell below $ 86 per ton on December 27. Such a low price was not recorded since December 4, and since then the previous level has not been recovered. Meanwhile, the European gas TTF and Brent oil are timidly revaluing after hitting bottom: gas at € 21.98 / MWh on December 31, and Brent at $ 52.73 per barrel on December 27. For Brent, this rebound could be the beginning of the price recovery expected for the first quarter of 2019, according to the producing countries that expect the price to rise between 20% and 30% during the first quarter of this year following the agreements to reduce production and stabilize prices.

After the holiday period, and for the week of January 7, the electricity demand increase foreseen by Aleasoft is 15.7%. The reason behind is that in addition to the recovery of the usual work activity, the decrease in Temperatures are expected to be around 3.5 ° C below historic averages.

Reserves in the peninsula’s hydroelectric reservoirs stand at 10,177 GWh, very close to the average values ​​of the last five and ten years, but 52.8% above those of a year ago.

Wind, photovoltaic and other renewables

As for solar production, both photovoltaic and solar thermal, for the coming weeks, AleaSoft forecasts show a significant increase in production above average historical values.

85% of Spaniards are clear that climate change is a reality, according to the CIS

85% of Spaniards are clear that climate change is a reality, according to the CIS