114 years after Captain Scott’s Discovery expedition to Antarctica, new techniques applied to the cyanobacteria samples taken by the explorer have revealed interesting data that will help understand the effect that human activity has had on the phenomenon of climate change.

The Discovery Expedition (1901-1904) was the first official expedition carried out by the British in Antarctica in the 20th century. Robert Falcon Scott was in charge of leading the expedition, whose objective was to carry out scientific investigations and geographical explorations in what, at that time, represented a continent still to be explored.

Now, one century after the scientific adventure in Antarctica, the analysis published in the “European Journey of Phicology”, prepared by scientists from the Natural History Museum of the University of Dundee, United Kingdom, and Brain Chemistry Labs, in the United States, has evaluated the presence of cyanotoxins in the samples taken by Captain Scott. These cyanotoxins are the toxins produced by bacteria called cyanobacteria.

The point is that these samples taken more than a century ago were extracted at a time when Antarctica had not yet suffered the effects of human activity, unlike its current situation, in which the frozen continent has suffered drastic increases of temperature that impact its ecosystem, a situation that is increasingly worsening over time.

The finding is that the cyanobacteria samples studied by the researchers turned out to be a building block for the levels of cyanotoxins in Antarctic freshwater. Having samples that have been separated for 114 years from today´s ones will enable scientists to understand the impact that human activity has had throughout this period and determine the effects of climate change on blue-green algae and their toxins in Antarctica. 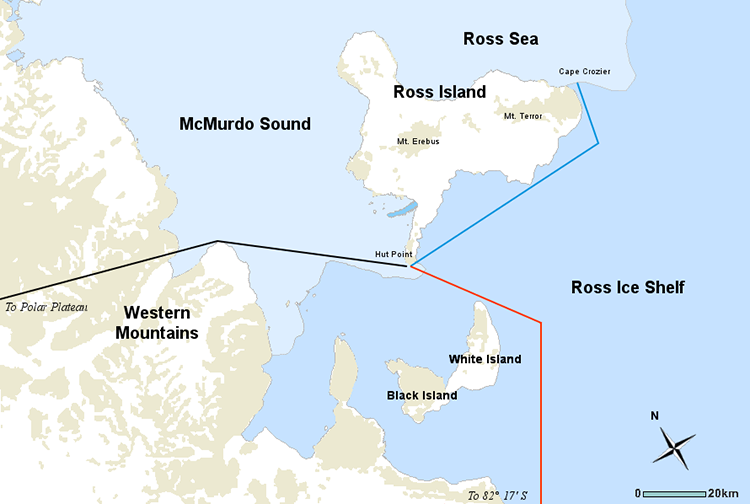 Map of the work area of ​​the Discovery Expedition, including the three routes of the explorations carried out by its members

Another scientific contribution that Captain Scott could make to the study of climate change could stem from the explorer’s collection of bryozoans, small colonial animals that inhabit the Antarctic seabed.

According to a study published by the journal Current Biology, after comparing the samples taken by Scott between 1901 and 1904 and those collected by other expeditions throughout the 20th century, a large increase in the presence of zoarious, colonies formed by thousands of bryozoans has been detected. This may entail that from that date the bryozoans have been absorbing more carbon from the ocean, indispensable for their survival. This hypothesis opens a new window for scientists by considering the hypothesis of whether carbon dioxide emissions to the atmosphere can actually be counteracted by the activity of certain animal species in the oceans.

Can coal and nuclear be shut down simultaneously?

Can coal and nuclear be shut down simultaneously?