Apricot´s 8 Climate Projects to reduce about 1.3 million tons of CO2

by Carlos Sánchez
in BIOMASS
0

Spanish company Apricot Ingeniería, leader in the planning and development of thermal energy network projects, has submitted 8 Climate Projects that will reduce about 1.3 million tons of CO2. They propose hybrid heat networks that would operate with thermal energy and biomass backup in cities such as Alcalá de Henares, Brunete, San Sebastian de los Reyes, Fuenlabrada, Guadarrama, or Madrid.

The nearly 1.3 million tons of CO2 to be reduced through Apricot´s 8 Climate Projects represent 15% of the 62 Climate Projects approved this year by the Ministry of Agriculture and Fisheries, Food and Environment to boost the reduction of carbon emissions in our country. This would add to 43% of the total reductions in CO2 emissions, more than 3 million, expected to be prevented through the projects selected in the 2017 call.

In total, the Ministry of the Environment has selected 62 of the 111 projects submitted. The residential-commercial-institutional sector remains, as in the previous calls, that with most projects proposed. A total of 25, to which 5 are added in the agricultural sector, 13 in the waste sector, 8 in the transport sector, 6 in the industrial sector and 5 in the fluorinated gas sector, as reported by MAPAMA. Among them, hybridization projects with renewables are beginning to be seen, an increasingly common trend in air conditioning and energy rehabilitation of buildings.

One of the Climate Projects presented by Apricot Ingenierías is the proposal of a district heating or heating network for Madrid that could supply renewable thermal energy to 20% of the homes in the city.

It is worth noting the project of the city of Madrid, the Climate Project with the largest reductions in CO2 presented at the Ministry of the Environment, with emissions reduction of nearly one million tons, which would make it a benchmark in the development of sustainable projects in all Europe. The proposal is based on a district heating that could supply renewable thermal energy to 20% of the homes in the city.

This would put the capital of Spain on par with other major cities such as Berlin, Paris, New York or Copenhagen, which have already developed similar initiatives. “This is one of the most transformative projects in the city of Madrid that would reduce pollution like no other measure currently existing,” Teo López, general director of Apricot Ingeniería claims.

Another important project of this company, which is already underway, is Alcalá de Henares. Alcalá Eco Energías foresees the use of concentration solar thermal technology with a biomass power plant backup. It will prevent nearly 100,000 tons of CO2 and could potentially reach some 12,000 homes in this town, several companies and a number of buildings for other uses. This will translate into a significant reduction in the energy bill and pollution in the city, an Apricot statement claims. The company has also analyzed and submitted heat network projects in more than 60 municipalities spread across Asturias, Castilla y León, Castilla la Mancha, Madrid and Aragón.

The Ministry of the Environment has also selected as a Climate Project a hybrid system similar to that of Alcalá de Henares to be implemented in the municipality of Brunete, also in the Community of Madrid. This is the construction of an urban network of heat distribution-or district heating- designed to meet the demand for heating and hot water for a set of housing and buildings for non-residential uses in the town. This project is also from Apricot 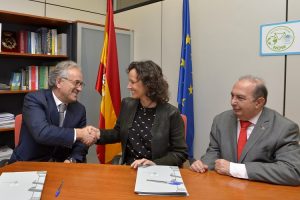 The company has also collaborated with the Municipality of Móstoles, which has fostered a similar network in this city, whose proposal has also been selected in the Climate Projects. Another was presented with the City Council of Torrejón de Ardoz, with the proposal pre-selected although it did reach the end of the process due to the municipal corporation decision not to develop it at the moment.

Among this edition´s Climate Projects there is still one more hybrid system promoted by Geothermal Energy, but this time it operates with geothermal and aerothermal energy and will be installed as an energy rehabilitation measure of a residential building to meet the air conditioning and domestic hot water needs of eleven houses and an office.

Biomass stoves and boilers installed in Europe have saved 98,000 million liters of diesel